Saved: Rescued animals and the lives they transform 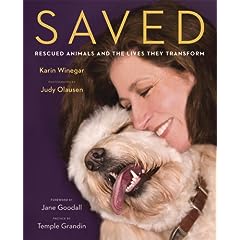 and loved Marley and Me

of which I’m not a big fan), you’ll adore Saved: Rescued Animals and the Lives They Transform

It’s an emotional collection of 28 real stories about pets which were rescued — and which in turn rescued their new owners or transformed their lives. Think of it as a Chicken Soup for the Soul

One of the stories is about Don and Darlene Ahlstrom from Minnesota who adopted two Great Pyrenees.

The dogs had been found in a ditch, starving, left behind after having been severely beaten with an iron pipe or bat. A call for donations to help to provide care for them had donations pouring in at the Humane Society; donations and applications to adopt the dogs.

The Ahlstroms got them. They named them Hope and Chance and brought them back to their home; a hospice and adult foster care home. There, in the past 10 years, they’ve become part of daily life, encouraging and comforting many. Especially Hope, who before going outside checks into every resident each morning.

The dogs help people make the difficult move away from independent living. And sometimes they have a bond beyond the ones we can establish. One of the residents, Mildred, suffers from Alzheimer and seems far, far away; she usually sits in her wheel chair, staring away in the distance, not being there. But when Hope comes to sit with her she comes back, comes alive, and her hand reaches out to pet him gently.

ended up doing 28 stories, collecting them coast to coast, but says she could easily have done ten thousand.

She says Hope and Chance’s story is typical of the stories in her book.

“It was exactly what we had in mind: reciprocal rescue. How an abused animal, rejected and abandoned, is rescued and really gives back more than it was given.

That’s what ‘Saved’ is about. It’s about reciprocity and the human-animal bond.

Our connection to animals is so primal to us and so joyful and necessary that even when we forget our spouses, we remember the animals.”

Next in Books:
I asked the angels to protect it